There is a wide range of strategies for interpreting history. Some historic sites spell it all out for us by reproducing it. Others offer only glimpses of the past leaving the visitor to piece together the clues. History is present all around us – you just have to look closely to see the past in the present.
I’ve often wondered about all the people who have lived in my 90 year old house. If the walls could talk – what would they tell us about their lives?

Similarly, Bill Bryson tells us how people lived in his book At Home. He dissects the everyday familial environment to better understand how people lived and what led to the design of spaces and objects over time. Sometimes history can be pieced together from physical clues. And sometimes it’s what’s missing that’s the most interesting part. Historic sites are offering new strategies for telling these stories. Here are a few examples –

Arkansas Heritage Sites at Arkansas State University opened an exhibit on Johnny Cash’s boyhood home in Dyess Arkansas. The house has been restored to its original condition, incorporating period furnishings and all the trappings of a 1930s Dyess house. Stepping into the 5-room house, the visitor is immediately transported. One catches a glimpse of the washed clothes on the clothesline, hears the radio playing gospel tunes and sees the original piano sitting prominently in the family room. The family is missing but the house tells their story.
Outside the home, the Cash house is one of the few 500 original houses left standing. Where Dyess Colony once held row upon row of tiny farmhouses dotting the cotton fields, now there are large expanses of fields and grass laced with the original road system. The context of the Cash house is therefore missing – the neighboring farmhouses, the outbuildings, the cotton fields are gone. Perhaps adding a cotton topiary or frame structure in the spot of the neighboring house would offer scale and context without literally recreating the place. Yet there’s something eerie about the lonely existence of a single house with no others to be seen while panning the horizon.
New technologies, such as augmented reality (AR), would be a powerful tool to add context. As a visitor pans the existing landscape with their smartphone, AR offers a digital layer on top of real landscape. Not only could one glimpse a peek at life in the Dyess community in the 1930’s but also see the land pre-Dyess – swamped from an earthquake in the 1800s or heavily forested just before it was cleared for farming. 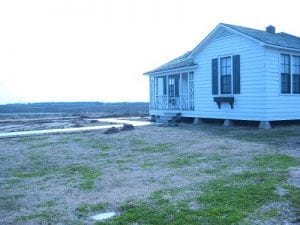 James Madison’s house – Ghostly Silhouettes
New structures have been built in the location of the slave quarters at James Madison’s historic property Montpelier. Built very close to the historic home, these skeleton shacks outline the tiny spaces that served as slave quarters. The simplicity of the open framed structures contrasts to the elegance of the Madison home. 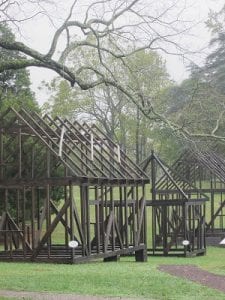 The Acropolis Museum is built at the base of the Acropolis and tells not only the story of the original classical art and architecture, but of the pillage of Elgian two centuries ago. Inside the museum, the sculptures are situated to mimic the relationship of the art to the architecture. The Parthenon’s columns, pediment and frieze are all housed in this modern building in a deconstructive method showcasing what’s there and what’s not. The original weathered sculptures are situated alongside plaster replicas of the missing ones housed in London’s museum. Situated in context, there are still pieces missing altogether, since archeologists have not uncovered all the antiquities. The frieze resembles an unfinished jigsaw puzzle highlighting the original weathered sculptures to the plaster replicas of Elgian to the still undiscovered pieces. The displays show visitors just how much was removed in 1816. And now with this new museum the argument stands – Does Greece have the right to house their antiquities? 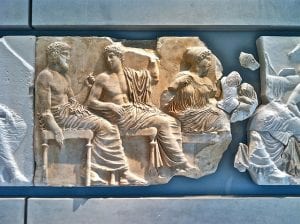 Karanghake Gorge – The World Without Us

The Karanghake Gorge in New Zealand houses an old goldmine, erected in the 1860’s when the southern hemisphere’s gold rush took the north island of New Zealand by storm. Sprawling throughout the cliff face like an archeological dig or oversized ant colony, this unique combination of pioneer era development and spectacular natural scenery allows the visitor to roam the graveyard of this ghostly site. Like the book The World Without Us, the building’s foundations are left as “ruins” intermingling with nature stating “man was once here but is now gone”. The passing of time has a presence here. 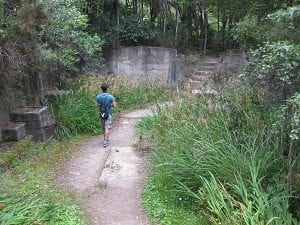 At Lakeport Plantation, Quatrefoil designed an exhibit about the restoration of the historic plantation house. Visitors learn about the original building construction from craftsmen’s notes documenting sources of building materials as well as the hours of enslaved labor that went into building the house. These notes were left in inconspicuous places, and along with other findings such as greeting cards, tintypes and trade cards (found behind mantels), the restoration team deciphered clues about the period. Even the unpainted walls throughout most of the house suggest the onset of the Civil War before the house was finished. The “history detective”, Ruth Hawkins, worked with her team at Arkansas Heritage Sites to uncover the stories behind this house built with enslaved labor. 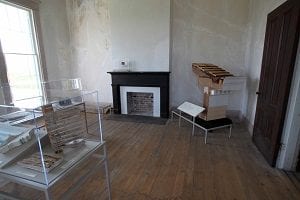